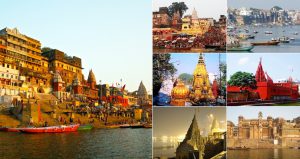 Varanasi city situated on the bank of the holy river “Ganga”, Varanasi (also called Benaras and Kashi) is well known for its ghats presenting kaleidoscope of changing scenes; temples including that of lord “Shiva” (The presiding deity of the city); Sarnath, the place where Buddha gave his first Sermon; Banarasi sarees having huge global market. It is also recognized as a center of pilgrimage, spiritualism, meditation, communal harmony and brotherhood. Above all, it has been a great seat of learning. Besides, numerous schools, colleges and institutes; presently it houses as many as five universities including Banaras Hindu University- the great seat of Universal Learning. BHU is the largest University in the Asian continent and third biggest university in the world.

The evening Ganga Arti performed at almost all the Ghats of Ganga simultaneously presents a unique view and is of real attraction to the tourist.